All the King’s Men (QAnon Exposé)

Trump’s presidency started falling apart before it even started… and try as they may, his damage control team hasn’t been able to keep the pieces together. While rumors of FBI indictments against Trump associates were being widely discussed in the Fall of 2017, TRUMP’s social media director propagated a competing narrative that, with the assistance of InfoWars Operatives and others, grew into a disturbing political movement that inspired several acts of domestic terrorism.

Initially, #Q Operative(s) would ask a series of leading questions, which I like to call a “Socratic circle jerk”. The questions were designed, IMO, to establish what their targets were willing to believe.

Their very first set of questions were posted in a 4chan discussion thread about the indictment rumors. “Guess who’s going to jail?” Having targeted MAGA, the answers people came up with: Hillary & the Pedophiles!

#QAnon followers then took the shape of two camps. One, obsessed with #PizzaGate, #Pedogate, baby cannibalism, pedophile priests, and Satanic sex cults. It evolved into a Moral Panic Op, the likes of which the Soviet Union launched against us during the Cold War.

The other took on a political bent, obsessed with conspiracy theories about Clinton crimes and Deep State coverups. Most of these were things that the Bannon-Mercer propaganda machine came up with for Clinton Cash… but with some treason in the mix + … S. Rich.

Once #QAnon operatives were able to establish what people were willing to talk themselves into… de-coders stepped in and started shaping “The Plan”. But before “The Plan” could be set in stone they had to establish credibility.

I’ve shared that link before, but with little comment. I’d like to point out, now, that Jerome CORSI claims he MET with actual people IRL… said that he was approached, informed, and recruited to participate in a military coup. He even wrote a book establishing the backstory for this Junta: Killing the Deep State.

I’d also like to point out that Alex JONES held conference calls with alleged government “whistle blowers” on his show, giving QAnon the appearance of legitimacy. An all-night live broadcast, streamed when Trump bombed that empty Syrian airbase was one such occasion.

Jerome CORSI then became the premier #QAnon decoder… thus, guiding the narrative. There is a huge collection of vids about his “decoding” on youtube: youtube.com/results?search…

Summary of “The Plan”: TRUMP would deploy military troops to the Southern Border. A crisis would somehow happen there, that would justify the declaration of martial law. Under martial law, Trump would round up enemies who he hadn’t already secretly whisked away to Gitmo. Tribunals & executions would be carried out.

Note: “The Plan” took shape long before the migrant Exodus from Central America , and long before Trump announced he was sending the National Guard to the border.

There are small variations. The Cabal could be the OBAMA/HRC regime, the Globalists, Satanists, Elitists, Liberals, whatev Bogeyman. And the crisis that would trigger the highly anticipated Police State could be caused be a migrant horde, Antifa, Commies, Liberals, or an army of angry women.

Mantras of “Trust the Plan” were recited whenever things didn’t go as they liked (often). That mantra evolved into “Be the Plan” after General MATTIS screwed up their Southern Border predictions (#OperationRedCastle)… prompting the #Q Faithful to encourage revolution ala #YellowVest. Unsuccessful attempts were made for a mass protest of General FLYNN’s sentencing… a failure they attributed to: “Trump supporters have jobs, and can’t just take off to DC whenever they like.”

Some of the #Q Faithful who watch InfoWars have adopted Pro-Russia positions, and believe that TRUMP has partnered w/ PUTIN to save the world. CORSI and the rest of those InfoWars jerks seem to love Russia… or at the least, are in favor of Détente. JONES has even had Aleksandr DUGIN on his show, and he has been a guest on DUGIN’s.

Here’s an example of the way CORSI conducted his #QAnon decode briefings. Those people, in turn, would do their own videos or social media posts to dissemiate. This is an important one, IMO. Good stuff starts at minute 8.

That video, actually, is probably not a good example of his ‘usual’ stuff. I think his followers thought it was pretty boring. But it should be super interesting to us who are aware of the Kremlin agenda…. since he claims to be the one who set up the TRUMP-KISSINGER pre-election meeting… which he says was about the Middle East and sounds like a violation of the Logan Act to me.

Here is one of his more typical “decodes”. Note that he continues to speak as if he personally knows #Q. Also, he implies that Admiral ROGERS was part of an earlier #Qanon coup d’état plot against the OBAMA administration.

Then, something happened in May…. and the whole InfoWars crew started freaking out and distancing themselves from the Op. I wonder why? ? 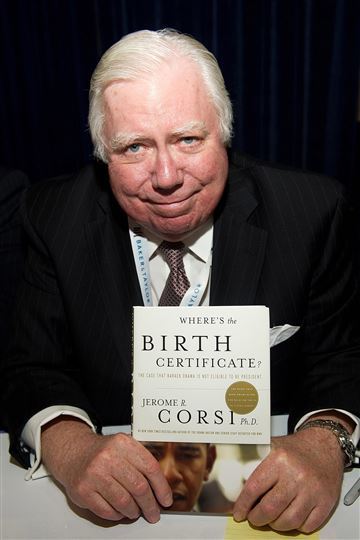 Mueller Subpoenas Jerome Corsi, An Alex Jones & Roger Stone Associate Jerome Corsi is the hateful, lying schmuck who helped birth the smearing of John Kerry’s time on a swift boat in Viet Nam, trafficked in birtherism and was involved in other ugly rightwing ratfuckeri…

Sounds like Jerome Corsi is trying to cut a deal with the FBI. Interesting. Exactly, who were those Generals that were supposedly planning a coup? https://t.co/okk2Q4KU2x

Did you hear the one about Traitor Jones, Corsi, Posobiec, and Cernovich being a CIA Clown Op? #AllTheKingsMen

That #FakeMaga Op happened, btw, shortly after CORSI said he’s not taking the deal, explaining that things had changed and he needed to change strategies.

And here we go… Jack POSOBIEC freaking out, just like he did when FLYNN got indicted and he thought the FBI had tapped his phones… after all his #pizzagate bullshit, acting like he had nothing to do with #QAnon… vowing to get to the bottom of things. Except that, he accidentally confesses that he’s been in on the whole thing from the beginning (but forgot, then suddenly remembered?).

And here he is… kind of sort of getting to the bottom of things. This article, by the way, was deleted by OAN… but I grabbed the cache: archive.is/4u4HJ

While OAN deleted the article, the video embedded in it is still on youtube for the moment. I downloaded a copy of it. You should too. It provides PROOF that MICROCHIP is the guy who has been dropping #QAnon breadcrumbs.

Based on the fact that POSOBIEC acted so excited when TRUMP noticed and re-tweeted him, I’m gonna guess that, while he and FLYNN go WAY back and some call him a Roger STONE protégé, he is NOT in Trump’s inner circle… and that he had/has no clue about MICROCHIP’s true identity. Had he been paying attention to what the Cold Warriors have been doing since the election, he might’ve known that we doxxed the mother fucker a while ago, and he should have thought twice about throwing MICROCHIP under the bus.

Never Mind The Russians, Meet The Bot King Who Helps Trump Win Twitter: “It’s All Us, Not Russians. And We’re Not Going To Stop”

In fact… a #QAnon Operative posted photographs meant to prove that he was either TRUMP, or someone working directly with him… and CORSI, who actually knows TRUMP personally, claimed early on that the whole thing was being coordinated with the President.

If there is any doubt about their intentions… Alex JONES stated publicly that it was their job to disseminate #Q info to the people, TO MOBILIZE THEM.

Is it any wonder how such tactics, which included stories about repeated attempts on the President’s life, would radicalize and inspire followers to send letter bombs to Trump’s list of enemies, shoot up a synagogue that provides assistance to migrant caravans, and try to blow up the Hoover Dam?

These logs also reveal that #QAnon is not their only active measures campaign, and that they have even infiltrated and are exerting influence with Antifa groups.

I find it interesting that the #Q Faithful like to call Hillary an “enemy combatant” and somehow think that this statement from KAVANAUGH not only makes her one, but would also give Trump justification for suspending her civil rights to summarily execute her. Interesting… because… if other Justices agree with him about our “war time” status… this would make all their seditious plotting and advocating for a #Q-Junta totally illegal.

Watch that video embedded above again, starting at minute 7… through minute 8… when I’m pretty sure CORSI recognized that JONES just said something extremely incriminating.

This entry was posted in Uncategorized. Bookmark the permalink.